In early Feb 2022 we had a successful series of flight tests in Newport Virginia and I thought it would be useful to describe to the Board what was done, and also of our product and services development.

At present, we have as products

Motes : Ballistic Penetrators intended for use on the Moon, but also possibly for use on Earth. These include a flight computer, batteries, various instruments, and Lora and 802.15.4 mesh communications transceivers. The Motes have gone through a various series of flight and field tests and I regard them as between NASA TRL 4 and 6 depending on the particular use case.

The Motes were originally developed for the AFRL "Lawn Darts" program. A recent variant is a Mote Sonde, which is a Mote without the heavy nose cone and with a parachute. This variant was successfully tested last week.

There is also a "Mote Deployer," to launch the Motes off of a flying platform. This comes in 1 tube and 4 tube versions, the 1 tube version was successfully tested this week.

Pankos: The same instrumentation and electronics as the Motes, but in a box, and intended for both "breadcrumb" deployment on the lunar surface and also as a box bolted on a lander or rover. In the latter case, the Pankos would have a direct communications link to the lander or rover, and would serve as a communications relay (a "Hive Hub" in the Lawn Darts program).

At present, we have three clients for these products.

1.) - AFRL has requested that we carry the Masten "SkyMage" navigation beacons on what we call the "Mojave Tests," in which the Masten Xodiak will launch, carry our Mote penetrators and our Mote deployer to an altitude of ~500 meters, whereupon they would deploy and carry the SkyMages to the surface.

This is a complicated deal where NASA FOP is paying Masten to fly the Xodiak and (through that contract) Masten would pay us for the carriage.

The balloon flight test was a test of the entire SII Mojave test package. The differences are

- we used a tethered balloon instead of a Xodiak.

With last week's tests, I regard us as mostly TRL 8 for the Mojave test. We need to do another tethered test with an actual Mote.

We are building for a free flying balloon into the stratosphere, which would begin our testing under lunar conditions.

(UPDATE: Summer 2022 – Masten Space has filed bankruptcy, so the AFRL flight test is on hold for the foreseeable future)

2.) The Institute for Interstellar Studies - US (I4IS-US) paid for last weeks' test. They want to do balloon tests of the ChipSats they are developing at altitude, including Sonde deployment to test mesh communications networks at altitude. We would be providing flight tests as a service.

Last week's test was a fully successful test of the capabilities they want, except not from a free flying balloon and without any ChipSats, which are still under development by a team at Drexel. 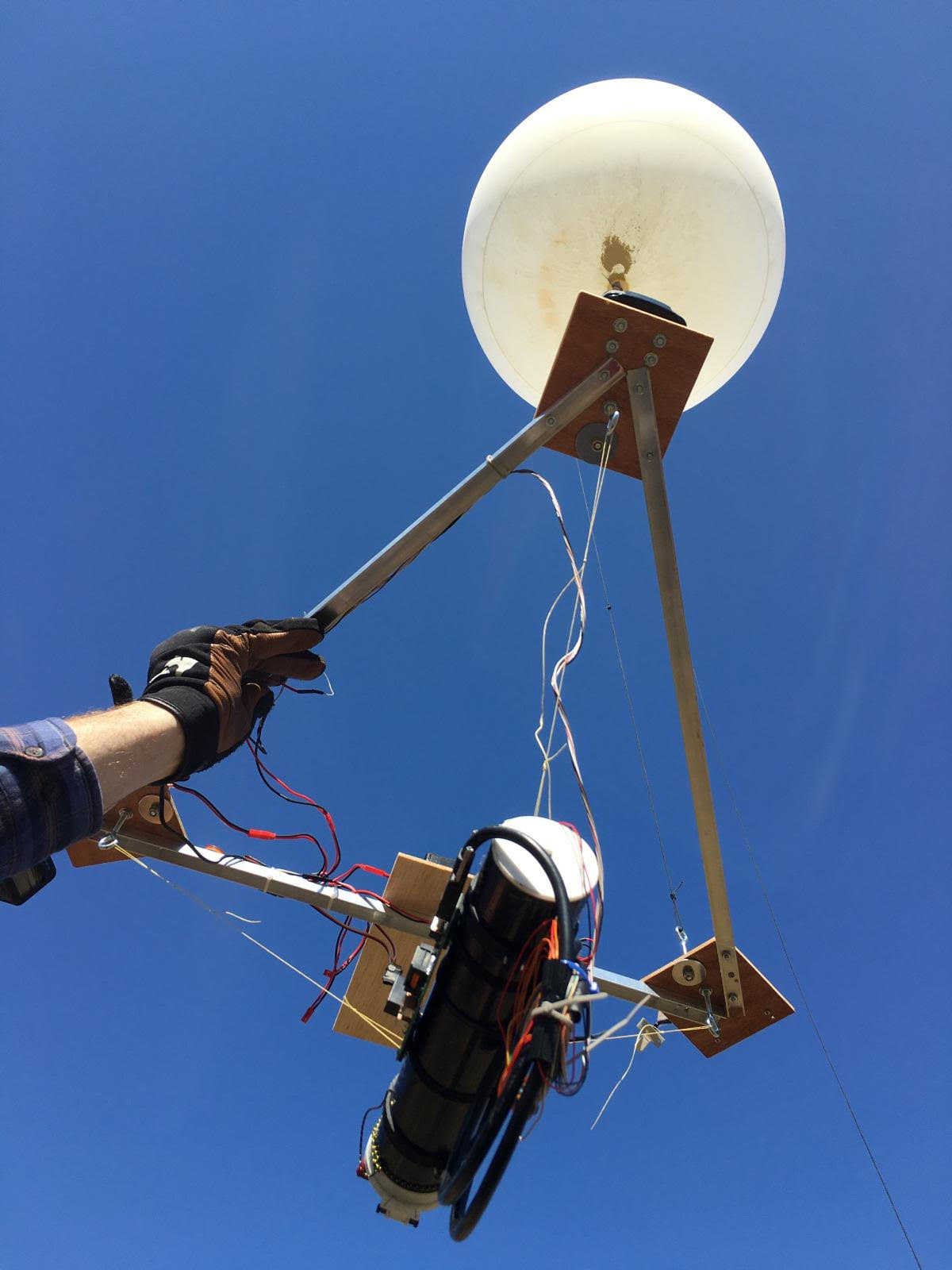 The top picture is Paul holding the balloon just before release. The triangular array is the instrumentation package, which has the go-pro camera, tracker and flight computer on separate vertices, with a GoPro camera on the left, behind Paul's arm, and the flight computer on the right vertex. The tracker is on the vertex just above the camera. The deployer is the tube hanging below the instrumentation package. The yellow parachute visible in the other picture (and required by the FAA) is obscured here by the mount for the tracker. The Lora receiver and antenna package on the instrumentation package is in the middle of the far arm and is just visible behind and to the left of the deployer. 802.15.4 was not tested on this flight.

The top picture actually shows the back of the deployer - it is facing away from the camera. The door is on the other side and is closed in this image (the Mote Sonde is still inside the deployer at the time this was taken).

The second picture shows the entire assemblage in flight.  The wind eventually took the balloon down on the ground and it popped - I believe on a fence. Other than that, all equipment was recovered and can be reused. 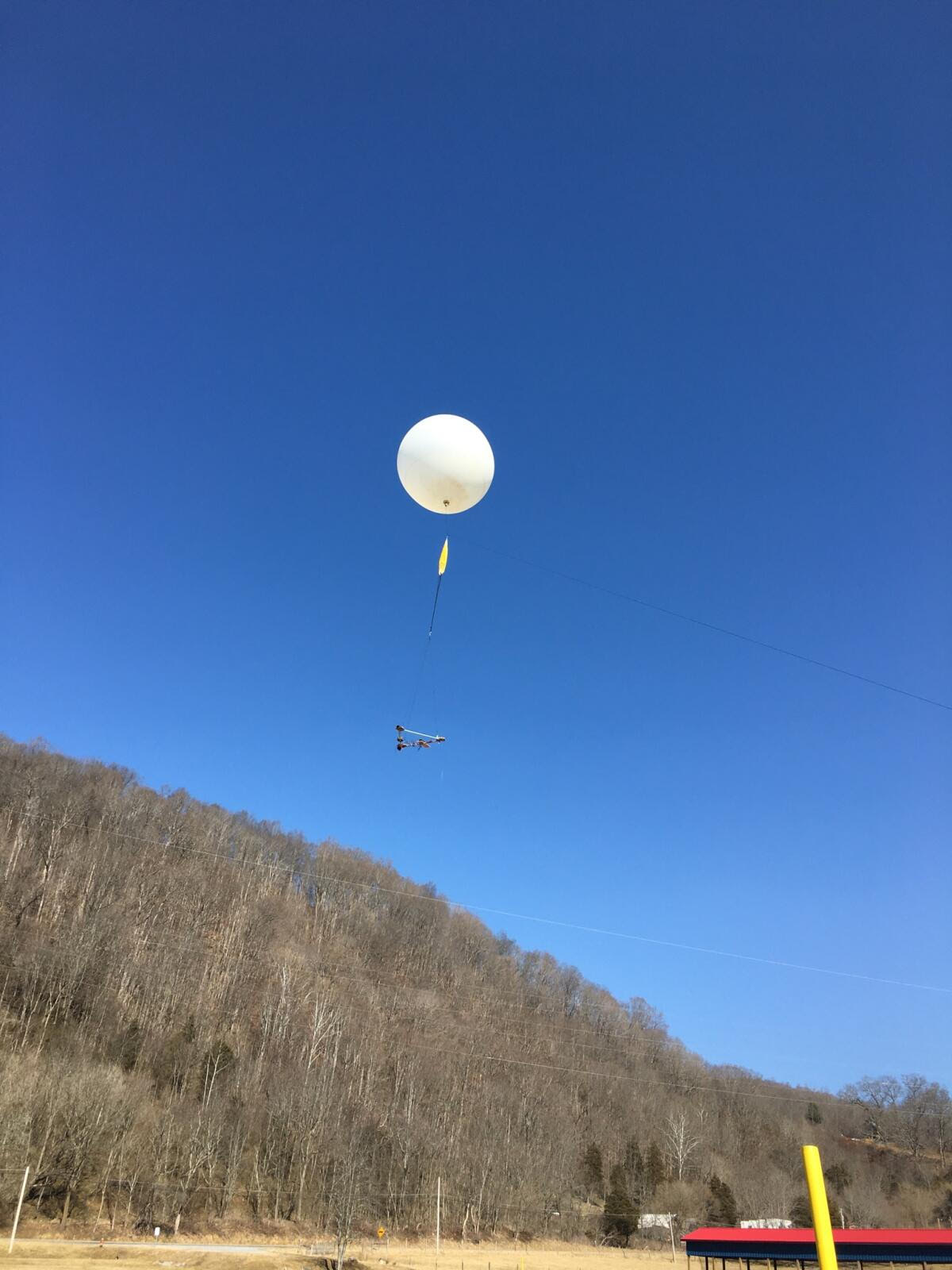 We also did a separate ballistic test, and the third picture shows a Mote penetrator embedded in the ground after a shot at ~ 35 m/s. This is little slower to what we expect with the Xodiak flight test - we have had faster shots in the past, but we were pressed for time on the ballistic part of these tests and had to call it a day after this one.

We met almost all  of our test goals:

- launch of a tethered balloon.

- flight of tethered balloon with instrumentation package and deployer.

- ejection of Mote Sonde from deployer by remote control, including burn-through of the strap holding the deployer door in place.

- mesh network between the balloon instrumentation package and the Mote sonde.

- data flow from Sonde to balloon to ground.

- operation of flight computer and other computers in flight

- we successfully tracked our location with a SPOT data tracker

- we acquired in flight video with the go-pro camera.

The goal we didn't meet was an altitude of 100 meters with good lift. This configuration would thus not have been adequate for a free flight into the stratosphere, and that needs to be addressed - we plan to repeat this test with a larger balloon. Stratospheric flight is part of our lunar and I4IS-US test program, although it is not that relevant for the Masten Mojave tests.